The lessons from the first totalitarian revolution

(Fragments. The full text is linked below) 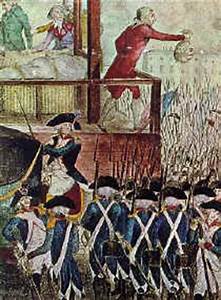 Castigating Robespierre more than 200 years after his death would have little point if he were not the prototype of the ideological frame of mind that is very much with us today. If we understand him, we understand that it is utterly useless to appeal to reason and morality in dealing with ideologues. For they are convinced that reason and morality are on their side and that their enemies are irrational and immoral simply because they are enemies. Negotiation with such people can succeed only if we have overwhelming force on our side and have shown ourselves un-squeamish about using it. Justifying its use to the electorate of a democratic country—used to thinking of politics as a process of reasonable negotiation and compromise—must involve showing in sickening detail the monstrosities committed in the name of the ideology. And that is the point of reminding ourselves of the crimes of the long-dead Robespierre.

-The [prevailing] attitude toward the French Revolution has been generally favorable. But as revolutions go, the French one in 1789 was among the worst.

– Maximilien Robespierre, [was] a monster who set up a system expressly aimed at killing thousands of innocents. […] He is the prototype of a particularly odious kind of evildoer: the ideologue who believes that reason and morality are on the side of his butcheries. Lenin, Stalin, Hitler, Mao, and Pol Pot are of the same mold.

-These atrocities were not unfortunate excesses unintended by Robespierre and his henchmen but the predictable consequences of the ideology that divided the world into “friends” and less-than-human “enemies.

-[…]to those who look back on the twentieth century it is depressingly familiar from the use that many murderous regimes have made of it. They all claimed that their aim was human well-being, but that incorrigibly wicked enemies, who have disguised their true nature and conspired against the noblest of aims, threatened its achievement. The supposed threat was so serious, and the aim so important, as to warrant extreme, albeit temporary, measures—to identify enemies, unmask their conspiracies, and exterminate them. To a handful of clear-sighted and courageous heroes of the revolution—like the KGB, the SS, and the Red Guard—falls the duty of performing these necessary tasks. They must harden their hearts and do what needs to be done in the interest of the greater good. The grave threat averted, the extreme measures will no longer be necessary, and then human well-being will be within everyone’s reach.

-A remarkable feature of the ideological frame of mind is that those in its grip actually believe these justifications for disemboweling, lynching, mutilating, burying alive, drowning, and hacking to pieces their unfortunate victims. In fact, the atrocities only strengthen the utter certainty with which ideologues hold their convictions and impose their aim.

–An ideology is a worldview that makes sense of prevailing political conditions and suggests ways of improving them.  Typical ideologies include among their elements a metaphysical outlook that provides a God’s-eye view of the world, a theory about human nature, a system of values whose realization will supposedly ensure human well-being, an explanation of why the actual state of affairs falls short of perfection, and a set of policies intended to close the gap between the actual and ideal. This last component—commitment to a political program and its implementation—is what distinguishes ideologies from religious, personal, aesthetic, or philosophical systems of belief. Ideologies aim to transform society. Other systems of belief do not involve such a commitment; if they do, they become ideological.

-Resting on fallible hypotheses about matters that transcend the existing state of knowledge, they are especially prone to wishful, self-deceiving, anxious, or self-serving thinking—to unchecked flights of fantasy and imagination. Reasonable people therefore regard ideologies, including their own, with robust skepticism

-Many people, of course, do not choose the ideology they hold but acquire it through indoctrination. It may be too much to demand of them to resist indoctrination, if it is persistent and sophisticated, and if they know of no reasonable alternatives.

The full article can be accessed here:

Multiculturalism and the Politics of Guilt. Toward a Secular Theocracy

Western Civilization usurper is trying to kill our soul. We are degenerating to the level of animals.