Secretary of State at Poland’s Ministry of Justice. 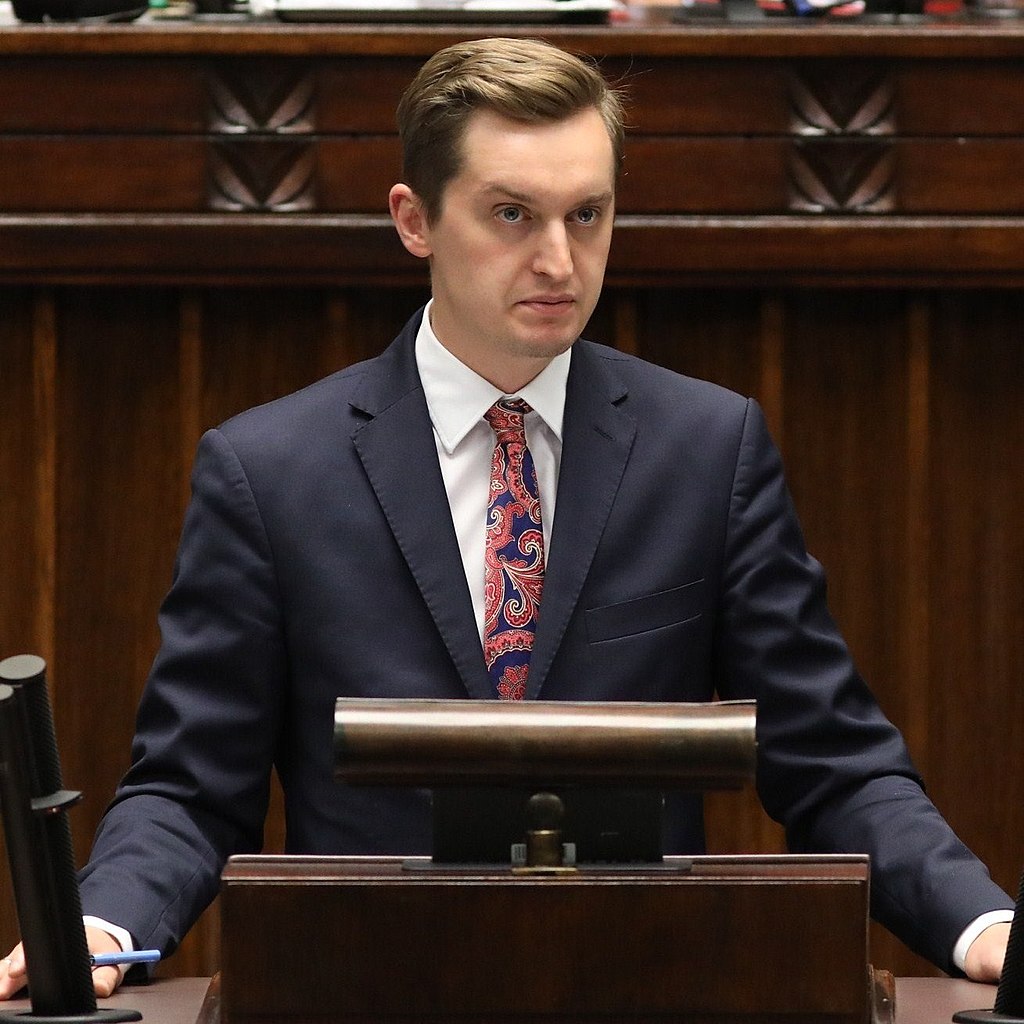 You are not allowed to compare. This is an ironic statement that has resonated very strongly in recent days, during the discussion in Europe concerning the judgment of Poland’s Constitutional Tribunal declaring the CJEU’s actions against the Polish judiciary unconstitutional.

Germany is in the lead in the attack on Poland in this matter. Officially, the judgment of the Poland’s Constitutional Tribunal was criticized by German Foreign Minister Heiko Mass, former Minister of Justice, today’s vice-president of the European Parliament Katerina Barley, and some German lawyers. Of course, not all voices from Germany were critical because, in the debate on this topic, the Polish side often brings up the jurisprudence of the German Constitutional Tribunal (FCC – Federal Constitutional Court), which in the past ruled in a similar spirit to the Polish one in the last week’s ruling. In connection with making these comparisons, a fundamental problem arose for the critics of this ruling. How could they criticize the Polish judgment while addressing its convergence with the German line of jurisprudence? Of course, according to the principle I have just mentioned, “you are not allowed to compare.” In this dispute, this principle means that, on the one hand, the two cannot be compared because Germany is, after all, a higher legal culture. It cannot be compared because the German Constitutional Tribunal issued its jurisprudence questioning the CJEU judgments in other cases. Then, it cannot be compared because Germany does not question the superiority of EU law in principle. The recipe for manipulation is ready and carefully implemented.

Ms. Barley, mentioned by me in an interview for the Gazeta Wyborcza, stated that the judgment of the German Constitutional Tribunal concerned a single one-off decision of the European Central Bank, so it cannot be compared. Whereas, quoted in the Polish media, Prof. Alexander Thiele stated on the blog “Verfassung” that it is impossible to compare because the German Constitutional Tribunal undermined the implementation of the provisions of secondary EU law and not of the provisions of primary law. Unfortunately for these commentators, the truth is quite different, which I will present in more detail than the commentators I have mentioned did.

In the first part of his thesis, Professor Thiele points to the allegedly precedential wording of the Polish Constitutional Tribunal’s ruling. It assessed the actions of the EU bodies as inconsistent with the constitution, which, as a result of the law-making actions of the CJEU, extend the competencies of the European Union without changing the treaties. First of all, it should be pointed out that the very wording of the sentence in the jurisprudence of the Polish Constitutional Tribunal results from the form of the application. Therefore, it is necessary to look at the essence of the statement, which is entirely consistent with the long-term jurisprudence of Germany’s Federal Constitutional Court (FCC).

Over several decades, this Tribunal has developed a pervasive and dynamic interpretation of the relationship between EU law and the German constitutional order. In the famous judgments of Solange I (2 BvL 52/71) and Solange II (2 BvR 197/83), the former FCC stated that the limits of conferring competencies on the Union end at a point above which states would lose their constitutional identity; the only source of competencies is the German constitution, and the European Union only uses competencies that have been delegated to it by the Member States. Based on this doctrine, the FCC did not block further integration but explicitly took measures if the integration, shaped by the CJEU’s jurisprudence, violated the German constitution in specific elements. This thesis was confirmed in the judgment of June 30, 2009, which replicated the view that the FCC was obliged to protect constitutional identity concerning European integration, and in the judgment of Mangold of July 6, 2010, (2 BvR 2661/06), in which it stated that it is the FCC’s responsibility to ultimately control the examination of the limits of competencies of EU institutions and bodies.

In 2019, there was a breakthrough in the jurisprudence of the FCC in the field of control of CJEU judgments, which is fundamental for the assessment of the judgment of the Polish Constitutional Tribunal and is carefully ignored or even distorted by German lawyers commenting on both judgments. In the judgment of July 30, 2019, the FCC (2 BvR 1685/14, 2 BvR 2631/14) indicated that the CJEU may not implement the system of a national court solely pursuant to Art. 19 (1), second subparagraph of the Treaty on European Union, which reads, “The Member States shall provide the necessary legal remedies to ensure effective judicial protection in the areas covered by EU law.” It also pointed out that assessing the judiciary system in Germany solely based on this rule would no longer be covered by the principle mentioned above since it would not contain the minimum level of democratic legitimacy required by the German constitution. All matters relating to the Polish judiciary are based on this treaty provision. The German FCC ruled two years ago that if the CJEU analogously assessed the German court, such a judgment would be inconsistent with the German constitution as the CJEU would exceed its competencies.

The considerations indicated above for the decade were largely hypothetical, warning signals sent by the FCC to the CJEU indicating that the German Tribunal, in the event of a violation of the powers conferred on the Luxembourg tribunal, will not hesitate to act if it would be found to be incompatible with the German constitution.

And it did not hesitate. It did it on May 5, 2020, in a case regarding the redemption of bonds by central banks in the system of the European Central Bank. What was a warning in the judgment from 2019 became a statement in 2020. The FCC explicitly stated that the CJEU exceeded its judicial mandate, defined by the functions entrusted to it in Art. 19 paragraph 1 article 2 TEU, the interpretation of the Treaties by the CJEU is incomprehensible and therefore objectively arbitrary. Consequently, the CJEU ruling on Germany does not contain the minimum level of democratic legitimacy required under the German constitution.

So it was not what Ms. Barley or Prof. Thiele wanted to be the in this case, which is that the judgment of the FCC was an one-off. It was fundamental because it directly challenged a specific CJEU ruling as not binding on the authorities of the German state. The FCC stated that the previously drawn red line was crossed. The FCC ruled on the same treaty basis as the Polish Constitutional Tribunal; in both cases, the constitutional courts found that the CJEU had exceeded its powers. Of course, everyone knows that the procedure itself had a different subject (although Prof. Thiele seems to indicate that Polish commentators do not notice this difference). Nevertheless, as I pointed out earlier, in 2019, the German FCC stated, in advance, that it would not recognize the CJEU rulings if they challenged the German judicial system. It can even be said that Poland had shown confidence in the EU bodies, adhering to the principle of loyal cooperation that they would not exceed their competencies.

Another of the professor’s theses, who argues that the judgment of Poland’s Constitutional Tribunal in a blank form undermines the primacy of EU law, is also wrong. The judgment of the Constitutional Tribunal indicates which specific actions of the CJEU are exceeding its competencies. As in recent years, this Tribunal has intensively assigned itself the right to assess many aspects of the organization of the Polish judiciary. The judgment necessarily mentions several aspects, including the assessment of the binding force of judicial mandates. And decisions made by the National Council of the Judiciary. Suppose one of the tribunals can be accused of blanket adjudication. In that case, it is precisely in the scope of the EU’s lack of competencies to evaluate the judiciary that the German FCC in 2019 did in the judgment mentioned above.

The judgment of the Polish Constitutional Tribunal caused a shock. It turned out that Poland has the strength and determination to defend itself against unlawful pressures and experiments and effectively uses its sovereign rights. So far, in the EU, it has been successfully done by the Germans, the French, the Italians, and others, and now by the Poles. However, only Poland is being accused of legal ‘thought crime’ when comparing the decisions of Polish and German tribunals because, as some German lawyers have been repeating for years, this is unacceptable due to the alleged superiority of the German legal culture. So, they can’t be compared.

The reaction of the Polish state was necessary because it became the subject of an attempt, unprecedented in the history of the European Union, to gain new competencies vis-à-vis a particular Member State (because, as we know, in Germany, the principles resulting from the CJEU judgments concerning the judiciary are not binding), which is to be disciplined for democratic elections performed by the citizens of that country. This usurpation prohibits their elected representatives of systemic changes following the constitutional order, although Poland has never transferred such competencies to the EU.

It may be surprising, after all, that the primary source of attack against the ruling of the Polish Constitutional Tribunal comes from Germany. Not only because of the case-law cited in this article. Namely, if one were to apply all the bizarre tests that the CJEU invents in successive precedents against Poland, it would turn out that in every aspect of these tests the German system would fail spectacularly.

Too little participation of judges in the process of selecting members of the National Council of the Judiciary? In Germany, there is no federal NCJ composed of judges. Judges in the National Council of the Judiciary elected by the parliament cannot effectively elect judges of the Supreme Court? In Germany, the body selecting judges to the Supreme Court’s counterparts does not include a single judge. The majority are the ministers of justice, and close to half are lawyers elected by the parliament. A Disciplinary Chamber that can waive judges’ immunities? In Germany, judges have no immunity. Lack of sufficient signs of independence from political factors? In Germany, judges may belong to political parties (as in some other EU countries; this is prohibited by the constitution in Poland).

This outcry of German commentators is an attempt to drown out facts which, if compared according to the principle of equality of the Member States, would push Germany, not Poland, to the sidelines when it comes to the rule of law. If … but you can’t compare. Or maybe it should be deemed acceptable, and it must be done?

As Secretary of State, Sebastian Kaleta  is responsible for legislation in the field of administrative law and European civil law, supervision of bailiffs and legal professions. He is also in charge of liaisons with the European Union, including matters pertinent to the examination of the rule of law in Poland by EU bodies and the European Court of Justice.

3 out of 5 leaders of the Polish minority imprisoned in Belarus safely arrived in Poland!

The European Commission Intends to Issue an Ultimatum to Poland. It Concerns the Judiciary.

US, Poland to Expand Economic, Security Cooperation Based on Shared Values of Freedom, Rule of Law

Polonia Institute Competition on the History of Poland